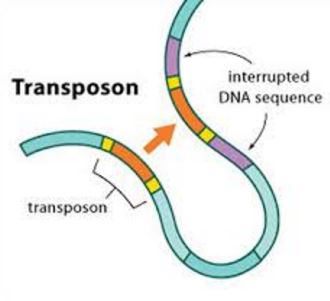 A reactivated Human-Specific Line 1 (L1HS) retrotransposon has been discovered in the genome that could increase the cancer risk by disrupting a colorectal cancer driver gene, APC.

Cells are building blocks of every living organism including humans. Deoxyribonucleic acid (DNA) located inside these cells is the hereditary material, that stores the genetic information as a code comprised of four chemical bases: adenine (A), guanine (G), cytosine (C), and thymine (T). The order or sequence of these bases contain the information, similarly to letters of the alphabet appear in a certain order to form words and sentences is essential for building and maintaining organisms and transferring this information to next generations.

DNA bases pair-up with each other, A-with-T and C-with-G, forming units called base pairs. Each base is also attached to a sugar and a phosphate molecule forming a nucleotide. Nucleotides are arranged in two long strands that form a spiral called a double-helix. The human body is composed of trillions of cells, and nearly every cell in a person’s body has the same DNA. All discrete DNA strands in a cell have been packaged into 23-pairs of thread-like structures called chromosomes. One of the two sets of 23 chromosomes inherited from the father and other from the mother. Together, all these chromosomes in one cell are known as the human genome.

The genes are regions in the DNA strand that store information for producing proteins. Proteins, a type of large complex molecule that play many crucial roles in the body. They do most of the work in cells and are required for the structure, function and regulation of the body. Human DNA consists of about 3-billion bases and approximately 21,000 genes that provide instructions to produce thousands of proteins. Therefore, maintaining the same code for protein instructions is crucial for the normal function of the body. But, sometimes sequences that makeup genes can be permanently altered due to many reasons such as age and smoking. They are known as mutations.

Mutation size can vary from a single base pair to a large segment of a chromosome that includes multiple genes. Once a gene is mutated, the correspondent protein also becomes useless. The main reason for cancer is these gene mutations and subsequent protein alterations. Sometimes, even one mutation in one gene can cause cancer. Therefore, the human body maintains complex mechanisms to regularly correct these errors or mutations in DNA sequences. However, due to unrepairable mutations that are acquired during the lifetime and other mutations that were inherited from parents, cause many diseases depending on the importance of mutated gene for the body’s function.

A group of scientists at the University of Maryland has discovered a new type of acquired mutation that increases the cancer risk of humans. They focused on a group of repetitive sequences called “Transposable Elements” (TEs) that were incorporated into the genome million years ago from parasitic organisms like viruses. These TEs have been co-evolved with the human genome and now have become a part of the genome. They can cut and paste their sequences from one place to another when they are active. Therefore, human genome has been continuously deactivating these TEs using several defensive mechanisms making them sleeping beasts in the genome.

They found that some TE types escape from these deactivations due to faults in this defense system and start to duplicate. One such TE type called “Human-Specific LINE1” (L1HS) TEs has been reactivated in normal colon cells and inserted one of its copies in the middle of a gene called “APC” on chromosome 5. This gene produces a protein essential for the function of the colon. Followed by this mutation, other essential genes for normal function of the colon such as “PI3KA” and “KRAS” are also mutated. These mutations then cause to initiate colorectal cancer which is one of lethal cancers in the USA. Moreover, this L1HS type is only found in African and African-derived families, reflecting that the ancestry of an individual is likely to influence cancer risk. This study is very significant as this is the first clear evidence that shows these inactive TEs reactivate and initiate cancers in humans. Furthermore, they stated that further studies are required to investigate the reasons for these activations and to use this information for diagnosis and treatments.