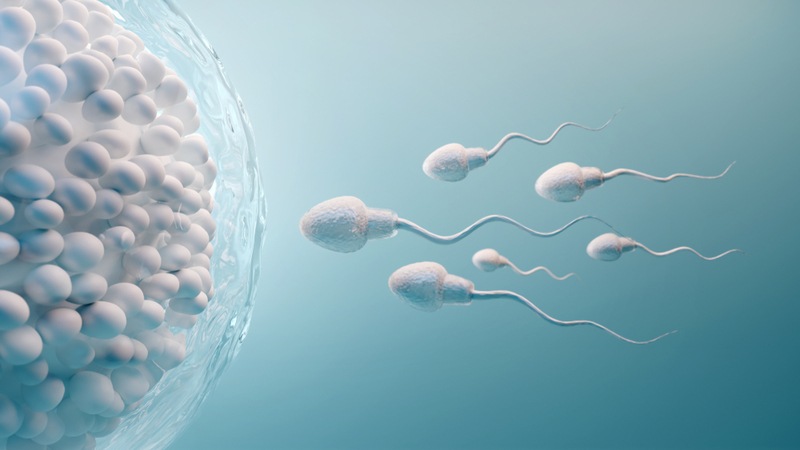 The most significant event in the human world takes place inside the mother’s fallopian tubes. Millions of sperms from the father compete for the opportunity to become the next representative of the generation. But only one sperm among them will be lucky enough. After going through a complex series of development and growth for about 9 months, a new human being is born. But how did all this happen? To understand this process, we have to have an idea about the structure of the egg cell and the sperm.

Sperm cells are produced in the testes of males by a process known as Spermatogenesis. It takes about 74 days to complete. Sperms are tiny, about 50 μm in length. All sperm cells may not look alike. As a result of various abnormalities during spermatogenesis, they may vary in shape and size. A sperm cell comprises the Head, Midpiece (body), and Tail.

The head of the sperm is oval-shaped. It measures 2.5 to 3.5 μm in diameter and 4.0 to 5.5 μm in length. It contains the haploid nucleus which carries paternal DNA within 23 chromosomes. The nucleus takes up around 65% of the head. The front end of the sperm head contains a vesicle known as the acrosome. It contains acrosin enzymes in the acrosomal matrix. Apart from the enzymes, the acrosome also contains polysaccharides such as mannose and galactose.

The acrosome plays several important roles in fertilization. With several associated molecules, the acrosome is involved in the recognition of the egg (ovum). This stimulates the cell to swim towards the egg, a chemotactic movement. Chemotaxis allows the sperm to navigate towards the egg cell through chemical signals, which ensures that the sperm fertilizes a conspecific egg.

The midpiece (body) is in between the head and the tail. It contains many mitochondria. In some instances, the midpiece is considered a part of the tail.

The sperm tail is a thin, elongated structure that is about 45 μm in length. It makes up about 80% of the entire length of the sperm. It helps the sperm to move forward (propel) therefore needs a lot of energy. This energy is produced by the mitochondria in the midpiece.

The egg cell is the largest cell produced in the human body with a diameter of about 0.1mm. It is the only human cell that you might be able to observe with your naked eye. An egg cell is a spherical, non-motile gamete with yolky cytoplasm and enclosed in egg envelopes. The human ovum is microlecithal with a large amount of cytoplasm. Unlike sperm, the egg has not completed meiosis. It’s stuck in the Metaphase II stage of division. This means that the egg is haploid but with sister chromatids still attached. Also unlike sperms, the meiotic division to create eggs, Oogenesis, only makes one viable egg.

The human ovum is surrounded by several egg envelopes.

It is the innermost layer. Thin, transparent, and is secreted by the ovum itself.

A thick, transparent, and non-cellular layer of glycoproteins. It is secreted by follicular cells and the oocyte. Between the vitelline membrane and zona pellucid, there is a narrow perivitelline space.

It is the outermost layer of the ovum. A thicker coat formed of radially elongated follicular cells.

Sperms set forth on a long and perilous journey to the egg cell, but not all the sperms will make it up to the end. A healthy adult male can release between 40 million and 1.2 billion sperm cells in a single ejaculation, yet only around 2 million will reach the cervix. Around 1 million can reach the uterus. Among that 1 million sperm that reach the uterus, about 10,000 make it to the top of the uterus. From here, only about half of the sperms will go in the right direction, heading to the egg cell. Around 1,000 of these reach the mid-part of the fallopian tube, but only around 200 reach the egg. In the end, only 1 lucky sperm out of this will fertilize the egg! This may be one of the most severe selection processes designed by the nature.