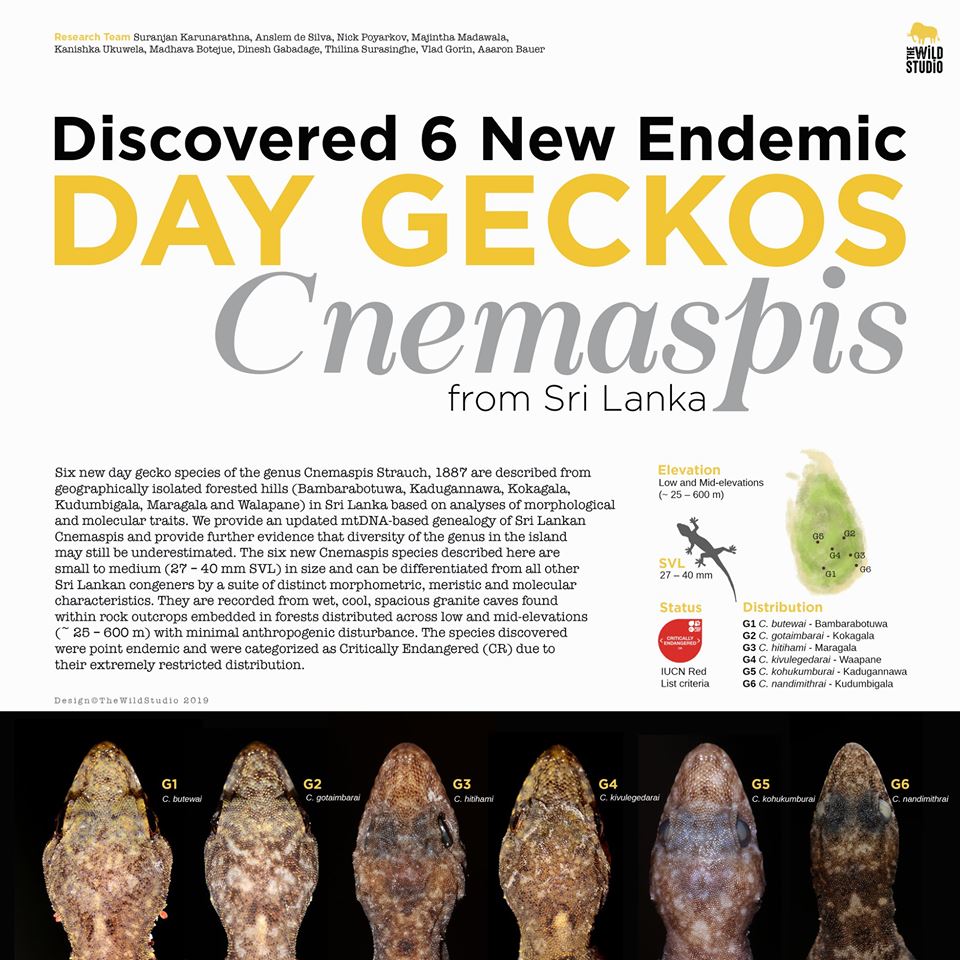 LOOK! It’s in the corners of your room or may be under your sofa. There’s no specific time for them, moving around with an alarming speed like a villain of a horror movie. They’ll easily climb the walls and if startled, they’ll find an open window to mush their fleshy bodies through, before disappearing away from our vicinity. Most often it gives us a nightmare which makes us think whether to LOVE these creatures or NOT.

Despite their looks and behaviors, its high time to get hold with the buzz word of these days; “GECKOs” as six new species of dwarf day geckos have been discovered from Sri Lanka.

Who are day geckos? As the name suggests day geckos are active during the daytime. They are generally fragile and should handle with utmost care due their delicate skin. Considering the South Asian Cnemaspis species, they are generally diminutive and has a broad flattened head with comparatively large, protruded eyes. These geckos are mostly rupicolous although a few are arboreal or ground-dwelling, mostly restricted to shaded surfaces of rocks, caves and trees.

Two of the discovered species are named under ancient warriors of the ten giant warriors of King Dutugemunu’s army namely Gotaimbara and Nandimithra and the other four species under the names of Kohukumbure Rate Rala, Hitihami Rate Rala, Butewe Rate Rala, and Kivulegedara Mohottala, who were patriotic national heroes who sacrificed their lives in Uva-Wellassa great rebellion of 1817–1818 to bring independence to Sri Lanka when Ceylon was under the British rule.

These day gecko species of the genus Cnemaspis Strauch, 1887 (Reptilia: Squamata: Gekkonidae) are described from wet granite caves of Bambarabotuwa, Kadugannawa, Kokagala, Kudumbigala, Maragala and Walapane which are known to be geographically isolated forested hills of Sri Lanka.

The current data on the species suggest that each of these geckos have a highly restricted (point endemic) distribution ranges. Also, this exemplifies that Sri Lanka’s Cnemaspis diversity is not limited to the south-western lowlands or to the central massif but is scattered throughout multiple bio-climatic and floristic regions.

Sri Lanka is considered as one of the global hotspots of herpetofauna diversity and a center of concentrated endemism. With this new discovery, the number of Cnemaspis described from Sri Lanka increases to 32, all of which are endemic to the island.

The binomial nomenclature of these new species along with the Sinhalese names (in brackets) are as follows;

All these species are categorized as Critically Endangered (CR) under IUCN Red List criteria based on their area of occurrence, extent of distribution and relative abundance which appears to be low.

The field study that paved the way for this discovery had mainly focused on morphometric characters and meristic characters of the species, it’s habitat and ecology, DNA isolation, PCR amplification and sequencing and phylogenetics.

This discovery is a result of rekindled interest in biodiversity studies that lead these researchers and conservationists to go out on scientific collecting expeditions to under-explored regions of the country, carefully cataloging the richness of species that is out there.

Although this can be considered a scientific saga that strengthens modern biology, there is a big hoo-ha among laymen and social media challengers on the names of the species, i.e. naming the newly discovered species under national heroes. The case in point, they were constantly criticizing and questioning the basis of equating the national heroes to geckos. This merely unravel the ignorance and lack of scientific knowledge among the community which is a disappointing situation.

Well, having a closer look on the scientific naming or the binomial nomenclature of a species, it is use to describe an organism in a way that is universal so that scientists around the globe can readily identify the same animal or plant species. It is useful as common names are often imprecise or misleading. The scientific name is broken down into the genus name, which comes first, followed by the specific species name.

The scientific name is subject to a set of rules prescribed by the International Code of Nomenclature and the authority to name a species lies with the person who first describes the new species. According to these rules, the proposed scientific names will be unique and will not result a yokelish image to any party.

In binomial nomenclature, it is a well-known fact that organisms often receive scientific names under a person’s name in order to honor and tribute that person. A taxon that is named in honor of another entity is an eponymous taxon and names specifically honoring a person or persons are known as patronyms. The basis of this is simply to honor and immortalize the name of the person as well as to show the respect of the scientist towards that person. Thus, it is not an insult or discourtesy at all. So, it’s better if those social media warriors have looked before they leaped into the scientific battle field ! Also, scientific names are everlasting, thus these names will persist in the official global database of species for many generations to come.

In an era where kids consider K-pop artists, Indian soap opera or TV series characters as heroes in life (NO offence though), isn’t it a good move to highlight our patriotic national heroes even from a scientific discovery? Whatever said and done, by naming the geckos after the national heroes, it simply honor them for their valorous service to the country and this ensures that their names will not fade away with time.

In a time of biodiversity decline, this discovery gives us hope that not all species are lost and that we have to protect not only the day geckos, but importantly the unique habitat that it inhabits and likely many other rare species’ homes.

The challenge is that protecting species requires a better understanding and knowledge about them. It doesn’t mean sending environmentalists or zoologists into remote forest spots for days on end. It means using what we’ve learned to inform how we protect vulnerable species. It entails identifying vulnerable habitats and protecting them at all costs.

In the meantime, these six new day geckos stand as both a triumph of survival and of the scientific endeavor. So it’s not the time to become critics of unworthy, but to actively participate, do research and work towards the conservation of these endemics.