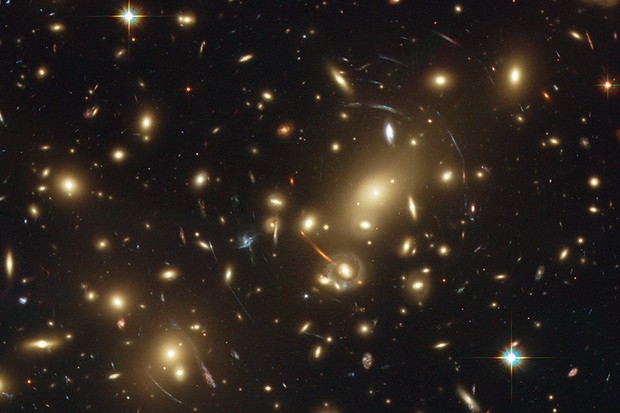 The Hubble Space Telescope spotted this ‘face’, shown in the below image, giving it a creepy smile from distant space in 2009.

Scientists found this image resembles the Cheshire Cat from Alice in Wonderland, therefore, was named by the same name. The ‘eyes’ of the cat are two massive galaxies, and the arcs that encircle those ‘eyes’ are also another two galaxies, one is a star-forming, and the other is a high redshift galaxy. What made the two galaxies look like arcs, is the phenomenon called ‘Einstein Rings’.

Gravitational fields of extremely large masses, such as galaxies, clusters of galaxies or black holes, warp space, deflecting and distorting the light from distant objects behind them. So, the light from the background object looks like arcs encircling the foreground massive object. We call this foreground object the gravitational lens, as it deflects the light, just like an optical lens does. When the background light source, gravitational lens, and observer perfectly align, these arcs create a complete or almost complete circle of light, and this is called an Einstein Ring. In other words, Einstein Ring is a type of gravitational lensing.

Featuring in figure 4 is one of the best images of Einstein Rings taken by the Hubble Space Telescope. In the centre, acting as the gravitational lens is a group of galaxies called Luminous Red Galaxies (SDSS J0146-0929), bound together by gravity.  The blue ring is a distant galaxy, magnified and warped into a nearly complete ring, or more like a horseshoe. Because of its shape, its nickname has become ‘The Cosmic Horseshoe’. The blue galaxy’s redshift (a measure of how the wavelength of its light has been stretched by the expansion of the cosmos) is approximately 2.4, which means that we see it as it was 3 billion years after the big bang. These observations provide an insight into the heavy metal formation, black hole accretion and many more.

These magnificent rings help astronomers in many ways. Einstein Rings (and gravitational lenses more generally), do not just deflect and distort, they magnify and amplify the light of the background source.  This helps the Hubble to observe more distant, fainter and smaller galaxies, which is otherwise impossible. Because of this, they are also known as ‘cosmic magnifying glasses’. For example, astronomers used an Einstein ring to look at star-forming regions of a distant galaxy, which was formed 2.4 billion years after the Big Bang, in 2015. This will improve the understanding of the formation of galaxies in the early universe.

Cosmologists analyze gravitational lensing patterns to get an idea about the way the dark matter has been distributed within galaxies and distances to them from the earth. This has helped them to create a map of the distribution of dark matter in galaxy clusters.

Forming an Einstein Ring between two stars is called micro-lensing. Despite the fact that it’s extremely rare, scientists are looking forward to witnessing one in May 2028. That’s when a distant red giant star, nicknamed S5, passes the nearby star, Alpha century A. This will provide a unique opportunity to observe planetary and low-mass objects in our nearest star system.

Even though this ring is named after Albert Einstein, who spelt out the effects of gravitational lensing in 1936, the Russian scientist Orest Chwolson was the first one to come up with this idea. In 1924, he published his groundbreaking paper on a phenomenon whereby a gravity of a massive object positioned between a distant light source and an observer, deflects the light’s path and act as a lens. Therefore, this ring is also known as the Chwolson Ring.

From its idea of existence by Chwolson to the first discovery of one in 1988 by Hewitt et al., Einstein Rings had been an unsolved mystery in space. Just like that, there are a bunch of theories waiting to be unveiled, by your very own effort and perseverance.