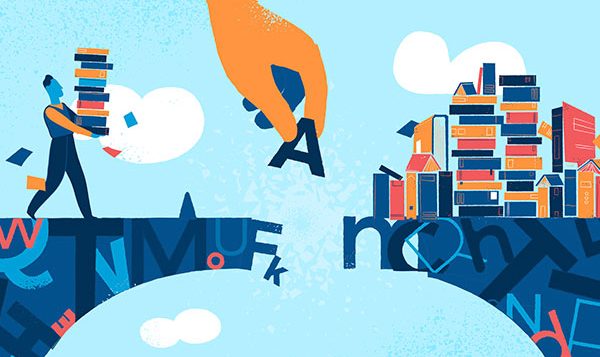 I hope you took some time to decode every word of the sentences above. Well, that was a simulation of the experience of dyslexia, making you decode almost every word while reading normally phrased, unscrambled sentences.

Dyslexia is not a reading problem. Dyslexia means difficulty in words. It is a common misconception that people with dyslexia see letters and words backward.

But people with dyslexia see things in the same way as everyone else. Dyslexia is caused by a phonological processing problem where people affected have no trouble with seeing words, but with manipulating them. A person with dyslexia will have to break a word in isolation like, “butterfly” into parts to read it.

Time spent in decoding word by word makes it harder for a person with dyslexia to keep up with peers. Spelling words phonetically like “wich” for “which” and “whent” for “went” is also common. Dyslexia affects up to 1 in 5 people. Some may have slight dyslexia whereas others may have it considerably.

All our brains show differences in structure and function. This is known as Neurodiversity. The deviations from the normal ideal brain cannot be labeled as pathological disorders, hence defective people. To make it more clear, Einstein, Pablo Picasso, Leonardo DaVinci were dyslexic. 1 out of 2 rocket scientists in NASA is dyslexic. But, they clearly had/have every capacity to be brilliant and successful in life.

It’s in our brains

The human brain is a complex organ that controls the body in receiving, analyzing, and storing information. Our brain is divided into 2 hemispheres. The left hemisphere is generally in charge of language, reading, analytical thought, logic, and math. The right hemisphere handles spatial activities like holistic thought, creativity, intuition, music, and art.

Evidence suggests that two systems as,

The brain is made up of two types of material as gray matter and white matter. Gray matter is mostly composed of nerve cells whereas the white matter is composed of connective fibers covered in myelin responsible for information transfer within the brain. People with dyslexia have less gray matter in Area A than non-dyslexic individuals, leading to problems processing the sound structure of language. They also have less white matter in the same area than normal readers.

Functional magnetic resonance imaging (fMRI) measures the small changes in blood flow that occur with brain activity. Studies revealed that non-dyslexic individuals had more activation in all of the areas know to be important for reading compared to those with dyslexia.

Delayed speech development, jumbling words, difficulty in understanding nursery rhymes, and difficulty in grasping the alphabet are several early symptoms. Putting concerned children to fMRI tests can accurately identify their problems. The cost of fMRI machines and relevant infrastructure is a limitation to why clinical or school-based imaging is not yet a practice.

Even though there is no hard and fast medicine to cure Dyslexia, constructive instructions can remediate some of the difficulties that people with dyslexia face. Children with dyslexia should not be left out. “Text” being the barrier to enter the world, dyslexic children should be given different methods of entry. It’s easier for us to watch a video to get a clear understanding, than reading a lengthy article. This approach of video, pictorial, and audio aspects being touched for dyslexic children can always improve their learning process.

Consulting a doctor to check whether the child’s reading level is below what’s expected for his/her age is appropriate. When dyslexia goes undiagnosed and untreated, these reading difficulties continue into adulthood.  Statistics show that 35% of all dyslexics drop out of high school. 50% of all adolescents involved in drug and alcohol rehabilitation have dyslexia. Furthermore, 70% of all juvenile delinquents have dyslexia.

Although everyone’s brain looks the same, they all work differently from each other. The brain is more like a fingerprint. Brains can understand and see the world in different ways.  A person with dyslexia may be really good at understanding patterns and solving problems, like to solve a rubrics cube without memorizing the algorithms. Dyslexic people can do many things, but they might do them in different ways. So In order to better understand the perspectives of those around us we should try not only to see the world through their eyes but to understand, through their brains.

That is when you understand by decoding, the bigger picture becomes clear.

“I failed in some subjects in my exam, but my friend passed in all. Now he is an engineer in Microsoft and I am the owner of Microsoft.”    -Bill Gates-