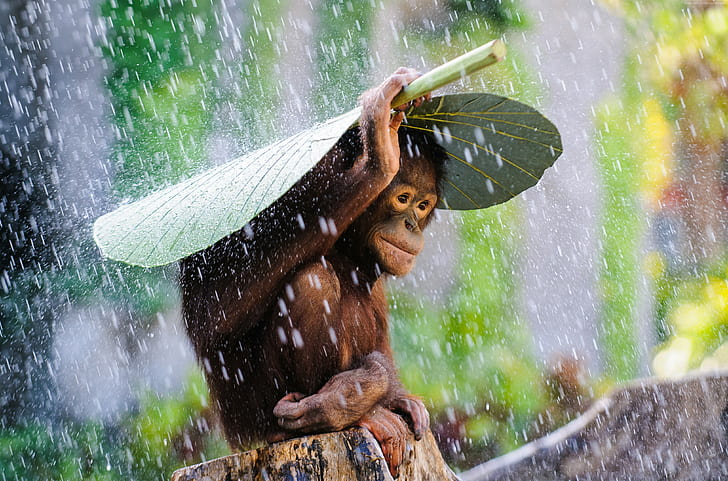 On saying that, today I would like to talk about one of such important species living in the world today. The Orangutans. The orangutans are of three extant species of great apes native to Indonesia and Malaysia. Alright, then the next question is who are actually the “great apes”? The name itself has given some sort of priority to the great apes. The great apes (also called hominids) are the members of a taxonomic family of primates which is named Hominidae. Family hominidae consist of eight such extant species of primates. In biology “family” is one of the eight major hierarchical taxonomic ranks of taxonomy. Taxonomy is the science of naming and classifying organisms or organizing various living organisms into different groups.

In family hominidae, it includes eight extant species of great apes out of which three species are orangutan species. Rest includes two species of Gorillas, two species of chimpanzees and one and only extant human species Homo sapiens sapiens.

Three species of surviving orangutans are;

Orangutans have thin, shaggy, reddish brown hair. They have long powerful arms and strong hands that they can use to manipulate tools. Orangutans are arboreal or tree dwelling creatures, which means they spend most of their time slowly walking, swinging and climbing through dense forests. Male and Female orangutans differ in size and their appearance. Male weighs between 50kg to 90kg while the female weighs from 30kg to 50kg. Height of male is between 1.25m to 1.5m while that of a female is 3.3ft. Also the orangutans have a huge arm span. It usually can stretch its arms up to 7ft and that length is longer than his standing height of 1.5m. This is the reason why we can see that their hands mostly touch the ground even when they stand up.

During a behavioral study carried out on the orangutans of Dehiwala zoological garden of Sri Lanka, I was able to observe two very characteristic behaviors of these animals. At the time of this behavioral study there were three individual orangutans of my interest, an adult male, an adult female and a juvenile orangutan. They (mainly the adult male) always tend to spend their time alone and rarely were active. Secondly, the baby orangutan (the offspring) always stuck around its mother and the female orangutan was very affectionate towards its offspring. And further reading on these two observations confirmed that orangutans are more solitary than other apes. Once they reach maturity, they spend most of their time alone, or in the case of females, they spend their time with immature offspring.

During this behavioral study some important focal marks(unique characteristics to specify an organism in behavioral studies) were identified in the adult male orangutan. They are;

Usually these are the characteristics of matured and dominant male orangutans. 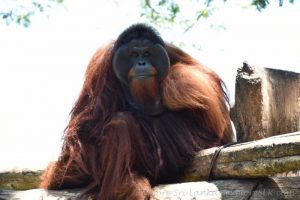 Also these dominant adult males produce long calls(vocalizations) that attract females and intimidate rivals. Both sexes will try to intimidate conspecifics with a series of low guttural noises. These noises are collectively known as the “rolling call”. When annoyed orangutans make a kissing sound and therefore it is called “kiss squeak”. Infants also make soft hoots when distressed. And the fun fact is orangutans are popular in blowing raspberries (making a sound by putting their tongue out and blowing). They have the ability to make 13 to 15 different types of vocalizations. 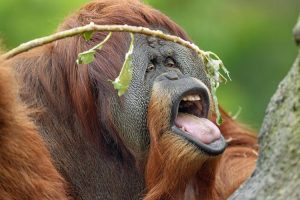 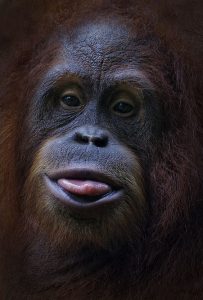 What do orangutans eat? Fruit makes up 65–90% of their diet. Ficus fruits are commonly eaten and are easy to harvest and digest. Bornean orangutans consume at least 317 different food items that include young leaves, shoots, bark, insects, honey and bird eggs. Although orangutans may consume leaves, shoots, and even bird eggs, fruit is the most important part of their diet. Orangutans at Dehiwala zoo are Bornean orangutans and one of the major problem about their diet is they are highly obese because very less activity in the zoo which is obviously not like in forest. 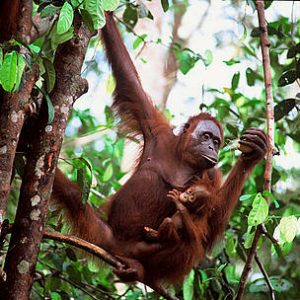 Orangutans are the slowest breeding animals of all primates. They give birth every eight years. Male orangutans do not participate in raising the young. Female orangutans are highly caring and play a full role in socializing the infant. Orangutans have the most intense relationship between mother and young of any non-human mammal. In the first two years of infants they are totally dependent on their mothers. Feeding, sleeping with young and carrying the infant is totally done by the mother. 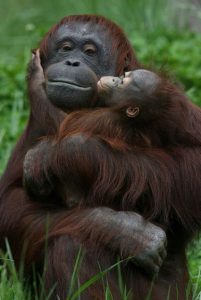 Orangutans are an endangered group of animals. One of the main reasons for this is the massive destruction of the orangutan habitats. The tropical rain-forest of Borneo and Sumatra is under huge threat of damage due to deforestation by humans. Therefore it is highly important to protect this extant species without letting them go extinct.

Some interesting facts about orangutans are;