About 2645 years ago, on a full moon day, in the grounds of the exceptionally beautiful Lumbini Sal Park of the ancient Kapilavasthu, an extraordinary prince in the name of Siddhārtha Gautama was born, where the newborn prince took seven steps and with every step he took, a lotus flower instantaneously bloomed with grace.

This auspicious full moon day is the Vesak Poya Day; one of the most precious days of the year for Theravada Buddhists and is celebrated religiously and culturally on the full moon of the Lunar month of Vesak (usually in the month of May). 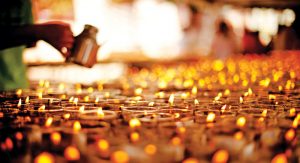 Of all the Poya days, Vesak Poya is considered to be of the utmost significance as it marks the three major milestones in the life of Lord Buddha (Sambudu Themagula); The birth, the enlightenment, and the passing away to Nirvana; also known as Parinibbana.

After witnessing the “Four Sights”; An elderly person, a diseased person, a corpse, and a dignified hermit, Prince Siddhārtha was determined to become an ascetic and thus performed the Great Renunciation (Maha Abhinishkramanaya) at the age of 29 years.

One fine Vesak night, ignorance was dispelled and wisdom arose, the darkness vanished and light emerged; Ascetic Siddhārtha seated beneath the Bodhi tree (the tree of awakening), realized the three marks of the existence of all beings and matter; namely impermanence or constantly changing nature (aniccā), non-self (anattā) and unsatisfactoriness or suffering (duḥkha), and finally attained enlightenment and became the Samma Sambuddha (The Awakened one) at the age of 35.

At the age of 80 years, Lord Buddha announced his passing away and attained Parinibbana, while resting on a couch between two Sal trees in the Upawattana Sala grove on a Vesak Poya Day. 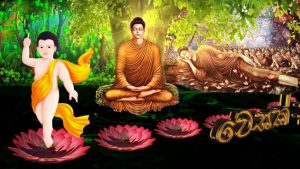 It was also on a Vesak Full moon day that the Gautama Bodhisattva received his first Niyatha Vivarana (definite foresight of a Buddha).

A few other significant occurrences in the history of Buddhism, such as Lord Buddha’s 3rd visit to Sri Lanka (Kelaniya) upon the invitation of the Naga King Maniakkhitha of Kelaniya, and Ven. Ananda Thero’s attainment of Parnibbana took place on a Vesak day.

The Celebration of Vesak

Theravada Buddhists all around the world celebrate this poya day with great devotion through many religious activities and events upon the remembrance of Lord Buddha for delivering the message of Dhamma (The Four Noble Truths) with great compassion towards all beings in order for them to end suffering.

During the Vesak season the entire island is garlanded with colorful electrically lit Vesak Pandols (Thoran); each pandol illustrating a story from the 550 Jathaka Katha (550 past life stories of Lord Buddha) and numerous vibrant Vesak lanterns, made and decorated by the hands of Buddhists. 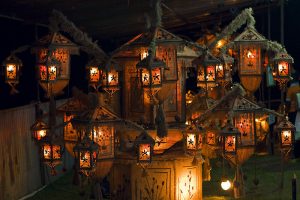 Numerous alms giving stalls (Dansals) are organized by Buddhists all across the country, and not only are they a great social service but also an enormous meritorious deed.

On Vesak, many more religious commemorations like Sil programs (to observe the 8 or 10 precepts) and Bakthi Geetha programs are held in temples and Sunday schools islandwide.

Vesak Poya is not only a day of celebrations, decorations, and joy but also a valuable opportunity to meditate and to reflect upon The Great Dhamma preached by the Lord Buddha proving the inexorable nature of life and the need to overcome the ills of life (saṅkhāras) in order to attain the supreme bliss of Nirvana.

Happy Vesak and May the Triple Gem bless you!