Funerals, death, grief; these are few things we have been experiencing during the past few days. The unfortunate events occurred on Easter Sunday led to the loss of many innocent lives. The living relatives of the deceased, even though utterly devastated, were seen to conduct all the funeral rituals hoping that their loved one would gain their rightful place in afterlife. However, is there an impact of these funeral rituals on the living relatives? And how does it help in enduring this devastating pain of death?

Grief or bereavement is a natural response to loss; it is an emotional suffering felt when a loved one is taken away from us. It is a painful journey a person should take on to overcome his/ her grief.

Psychologically, it is said that a person needs to fulfill four objectives in order to complete this journey successfully. First is accepting the reality of the loss; second is acknowledging the pain of grief; the third and fourth objectives focus on seeking the purpose of life and adjusting to live without the deceased. Even though most of us do not know; psychologically, our funeral rituals are designed in order to fulfill these objectives so that the relatives of the deceased  can endure the grief of death.

In Sri Lanka, funeral rituals vary according to the religion of the deceased, even though there are some traditional customs which are observed regardless of the religion. Sometimes these customs can vary according to the area of the country as well. Although these rituals are based on different beliefs, psychologically it is an opportunity for the relatives of the deceased to express their grief.

When a person is on his death bed; according Buddhist rituals, his family and relatives are supposed to gather around him and recite “pirith”, along with a Buddhist monk if possible. 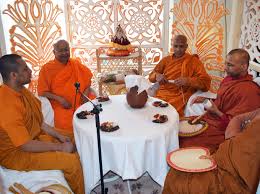 In Catholicism, the parish priest would be called to bless the dying person. The Hindu customs says that the dying person should be surrounded by his relatives as they recite “mantra” for the peacefulness of his soul. Muslims also does the same while reciting prayers instead of “mantras”. The psychological motive of these religious rituals before the death of a person is to help the dying person face the death peacefully and also to make it easier for his relatives to accept his death. Even though it is painful, seeing the death of a person helps his living relatives to accept his death.

But if the death is sudden, the family and the relatives of the deceased won’t get enough time to accept the reality. Therefore psychologically it is important that the relatives are given some time to view the dead body and pay their last respects. Many religions follow a ritual of keeping the body of the deceased for viewing. Mainly Buddhists and Catholics, keep the body for two, three days at the deceased person’s house or at a funeral parlor. 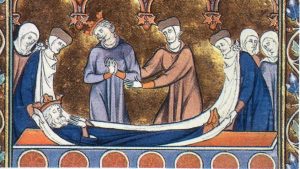 Even Hindus allow a brief time for viewing the dead body before the cremation. During this time all the people who knew the deceased or the relatives of the deceased, come to pay their last respects.  Therefore in Sri Lankan culture we call it a “mala gama”, meaning that the whole village gathers together at the house of the deceased. This is a great support for the family of the deceased as they are able to share their sorrows and pain with the people who come for the funeral. Also they will have to talk about the deceased and the circumstance of the death with those people; this helps them to accept their loss which is an essential step to reduce their grief. Also in some parts of the country there is tradition that says no food should be cooked at the deceased person’s house, so usually the neighbors provide food for the people coming to the funeral. This gives time for the family and the relatives of the deceased to acknowledge their grief.

Before burying or cremating the deceased, Catholics take the dead body to the church; where a priest would talk about all the good deeds done by the deceased while explaining the concepts of death. Buddhists too have a same type of ritual where a monk would preach “bana” about the death.  Muslims also have special prayer that should be said before the burial, which explains the concepts of death. Hindus too have certain hymns and mantras that should be said which explains about the life after death. All these rituals guide the family members of the deceased to understand and accept the death of their loved one.

After paying the last respects to the deceased, according to Buddhist rituals the body is taken to the funeral pyre and is cremated. But if the parents of the deceased are living, the body would be buried instead. Psychologically the reason behind this custom is  because the parents would not be able to see their children being cremated even though they have accepted their death. Then if the body is being cremated the funeral pyre should be lit by the family members of the deceased.

Hindus too follow a same kind of ritual in cremating the dead body. Traditionally only Hindu males are allowed to go for the cremation even though at present females also attend. Catholics and Muslims do not cremate their deceased; they just bury them after praying for the deceased soul. This is because they believe the dead would be resurrected on the Judgment day by God. During the burial both Catholics and Muslims have a custom of letting the family members of the deceased put the first handful of soil into the grave. However done, this step is very important as it helps them to accept the reality of the death.

After the burial or cremation of the deceased, everyone who attended the funeral gather at the house of the deceased for a meal. This custom can be seen in every religion. Although there are different beliefs for this ritual, psychologically this gives an opportunity for the relatives of the deceased to express their emotions and acknowledge their loss so that they can get back to their routine activities.

Expressing the grief and acknowledging the death as an inevitable truth of life is essential for moving on with life. If this grief is repressed it can cause psychological trauma which may lead to pathological conditions. Even though our ancestors may have not realized it, these funeral rituals were fashioned to avoid such a condition.